“All my life I have worked on three levels of consciousness:
Portraits, Social Injustice & Metaphysics

In my work I strive to heal, uplift and inspire viewers
and collectors to find perfection in their own being.”

— Artis Lane
Artis Shreve was born near the all Black village of North Buxton, Ontario, Canada. At the age of 21, after three years of art college in Toronto, Canada, Artis married Bill Lane and became Artis Shreve Lane. She moved to Detroit to study at Cranbrook Art Academy.  While in the Motor City Ms. Lane painted and sculpted the portraits of many of the business and political leaders of the day; Governor George Romney, Ford family members and Coleman Young, the Mayor of Detroit. From Detroit she moved to New York City, spent time in Texas, Ruidoso, New Mexico and traveled to Mexico City, Mexico to paint many of the prominent families in the region. She eventually moved to Los Angeles where she has lived for over 35 years. 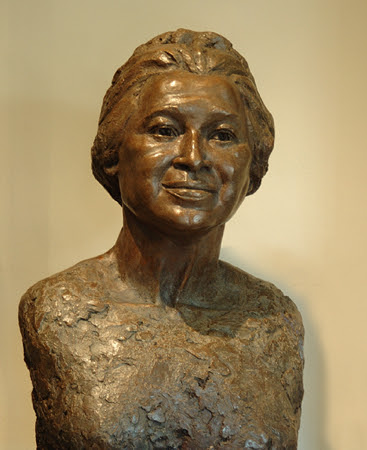 “Social issues became the next focus of her work. She was honored by the Smithsonian NationalPortrait Gallery in Washington DC during the installation of her bronze portrait of civil rights leader and long time friend, Rosa Parks. In 1999 she was selected to design the Congressional Medal of Honor awarded to Ms. Parks.”
— Marlena Donahue LA Times Art Critic

“My Civil Rights images led me naturally to ideas about what and who we are outside of race. I went from there to my most  important body of work, generic man and generic woman emerging out of the ignorance of material concepts and evolving into spiritual awareness,”
— Artis Lane.

“In the jaded 1990s, conceptual art rendered spiritual messages an artistic taboo.  Always ahead of her time, Lane has never veered from her subject matter, regardless of the vagaries of what happened to be ‘in’ or ‘out.’  As the new century opened, Museum shows and reviews indicate that more and more artwork had begun to deal with questions plaguing us: who are we, why are we here, what does our spiritual life entail?  As this content inevitably comes to the fore, Lane’s work becomes more and more germane.  As we catch up to her profound vision, Lane will point the way to the future with work that addresses our highest selves.”
— Marlena Donahue LA Times Art Critic 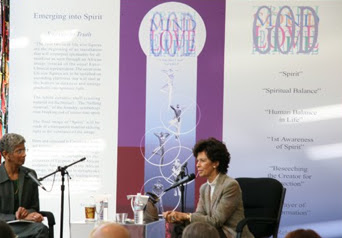 These questions lead her to her Metaphysical work. She leaves the workings of the foundry: the gaiting material, ceramic shell mold, etc., (the “birthing” materials of the foundry), on the bronze to symbolize generic man emerging out of material thinking into spiritual consciousness.

She then shows the work in pairs…the traditional black patina bronze and a version with the ceramic shell pieces remaining as a metaphor for the moralistic/materialistic conversations that mankind has wrestled with throughout eternity. 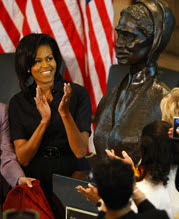 The new millennium brought new challenges and celebrations of her work. At the age of 80, Lanewas commissioned to create a 12 ft bronze of her “Emerging First Man.” The sculpture was created for an 1100-acre private estate community in Atlanta, GA. In 2007, she was honored by the California African American Museum with a retrospective of her life’s work including almost 100 works of art. One of her creations a bust of the Abolitionist and Suffragette Sojourner Truth was unveiled by First Lady Michelle Obama when installed in Emancipation Hall as part of the collection of the United States Capitol.

Artis Lane will turn 90 this year. She continues to be active in the contemporary art community and receives frequent commissions for both personal and community works of art.  Her work continues to embody her belief in the perfectibility of real man.